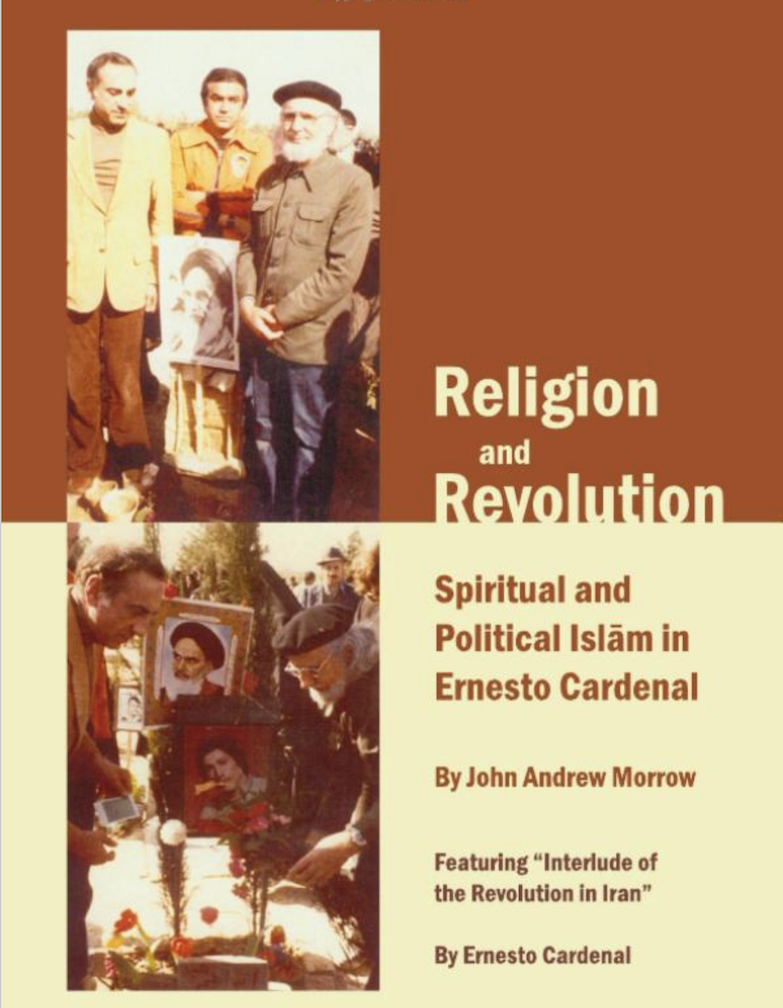 Sheikh Farrokh has written the book review below of the book: Religion and Revolution: Spiritual and Political Islam in Ernesto Cardenal by John Morrow.

Islām is one multi-dimensional religion possessing an exoteric realm and, more importantly, infinite esoteric layers and depths. The more one abides by the former, the more this will enable one to transcend though the latter. The ultimate goal being Him (Allāh)! And the nature of this journey to Him is one of the soul (anfusī), as one tradition narrates Allāh as saying: “your external side (ẓāhiruka) is to perish whilst your inner side (bāṭinuka) is Me”. In one Prophetic tradition, the differing levels of Islām’s manifestations have been broadly classified into three. They are, firstly, the shariah (letter of the law and doctrine) – whose abidance constitutes the first and most essential step for the wayfarer to Allāh (as the traditional logicians would phrase it ‘it is necessary but not sufficient’). The basis, not the spirit, of political Islām is to be located here. Second, is the ṭarīqah which constitutes and paves way for the ethical and spiritual route to acquiring unity with Allāh. Taṣawwuf or ṣūfīsm is defined as ṭarīqah-ology. Ṣūfīsm is a science not a religion. Like all other sciences, it comprises a set of principles and propositions which are open to evaluation. Assuming the sources from which these principles are extrapolated are from Shī’ite texts and books of traditions (in addition to the Qur’ān), then that would be on a par with Shī’ite ṣūfīsm. The spirit of political Islām is to be found in this realm. Finally, there is the ḥaqiqah (lit. truth) dimension of Islām where as a result of succeeding along the spiritual road to Allāh, one acquires unity with ‘The Truth’, seeing Him, hearing Him, tasting Him, feeling Him and being a recipient of His divine aroma.

In the book ‘Religion and Revolution: Spiritual and Political Islām in Ernesto Cardenal’, Professor Morrow has manifested his years-of-research incorporated knowledge in Hispanic, Native and Arabic-Islāmic studies to shed light on two poorly understood themes – both in the East and, particularly, West – via a specific narrative. The themes are, broadly-speaking, those of ṣūfīsm and the Islāmic Republic of Iran. The narrative is the story of a Nicuraguan revolutionary Christian priest – Ernesto Cardenal – who had progressively acquired some spiritual and revolutionary interests in Islām after visiting certain countries in the Middle East, especially Iran. Whether Cardenal is seen as merely a medium for Morrow to express his own findings on ṣūfīsm and Iran or as an ends in himself, the reader can decide that for him/herself. Either way, Morrows’ on-the-whole impartial and unbiased interpretation of Islām, ṣūfīsm and Iran, indirectly through the personality and writings of Cardenal, constitutes a calibre of work rarely seen or read in Western media and literature – mostly due to its seemingly close, albeit academic, sympathy with elements of Islāmic Iran’s right ‘conservative’ and ‘hardline’ elite and that is why, perhaps, at times one feels the author has stepped up his defence a shadow too much. The manner he has raised and evaluated some of the data he presents and some of the rumours – against ṣūfīsm and especially Iran – he refutes, clearly demonstrates that he has explored and gained access to (i) the pristine image of ṣūfīsm and

In chapter one, Morrow tries to show that Cardenal was well informed in relation to Islāmic gnosticism (ṣūfīsm). He does this by establishing ṣūfī influences on Thomas Merton who was Cardenal’s catholic mentor for two years and who updated Cardenal, thereafter, with his “intellectual and spiritual interests through 131 items of correspondence amounting to 217 pages in total”.  After analysing the ṣūfī influences upon Merton, the people who he had and was in contact with etc. and perusing through examples of the 217 pages, it may be slightly pushing it to expect the reader to regard Cardenal as one with strong or even intermediate ṣūfī tendencies.

In chapter two, one observes how Morrow meticulously and so finely traces many of Cardenal’s poems to ṣūfī sources. It is here that Morrow’s comprehensive understanding and awareness of ṣūfism manifests itself most. Not only does he trace some of Cardenal’s poems to ṣūfi poems that were, at times, not even referenced by Cardenal himself, but more importantly Morrow provides commentaries for those poems which are a breath of fresh air for novices and intermediaries in ṣūfism. By way of example, interpreting Rūmī and buttressing one’s findings through the writings of Ibn al-‘Arabī, Ghazzālī, Khomeinī and others is not an easy task. Another point which was prominent, in chapter two, was how the author defended many statements of the ṣūfis which have been poorly misunderstood down the centuries– both in the East and West – by those not well-versed in ṣūfism, leading the latter to make hasty conclusions.

In chapter three, Cardenal’s visits – as cultural and revolutionary representative of the Sandinistas – to Iraq, Lebanon, Libya and Syria are mentioned briefly. Here one sees the leftist similarities between Cardenal (a Christian-Marxist figure) and the different figures and organizations he had encountered in these countries. The spiritual similarities, however, were to be grown on his entrance into Iran. In chapter four, the events – as seen by Cardenal – at the start of the revolution in Iran were described in a positive and glorious setting, depicting it as a revolution that was religious in nature and supported by the masses. The mystery leftist man who was Cardenal’s guide in Iran was regarded as one reason behind some of Cardenal’s misunderstandings vis-à-vis Islām and Iran. The author explores the identity of such a figure – maybe a bit too much – and then corrects some of Cardenal’s acquired misunderstandings. One example being the notion of jihad, which Morrow interprets esoterically and comprehensively, instead of limiting it to the exoteric dimension of physical war and battle.

In chapter five, Cardenal provides a positive image of the Islāmic dress code for women rarely encountered in the West by non-Muslims. It may not be a sufficient elaboration on the hijab but to have come from a non-Muslim revolutionary priest, it offers a new angle especially to those in the West. One jurisprudential error attributed to the author is where he states that the feet too need not be covered which is not in accordance with Shī’ite jurisprudence (another inaccurate claim made was in chapter two in relation to the permission of non-Muslims entering Mosques – at least from a Shī’ite perspective).

Chapter six may be sub-divided into three, almost mutually exclusive, parts – save for the fact that it defends Islāmic Iran from the baseless and unfair attacks that it has received during its years since the Revolution from different religious and socio-political spheres. In the first part, Cardenal’s visits with Ayatullāhs Khomeinī, Sharī’atmadārī, Rūḥānī and Ṭāleghānī are mentioned. Cardenal’s impressions were concise but Morrow expanded, intensively researched and disclosed Sharī’atmadārī and Rūḥānī’s anti-revolutionary, and at times anti-Khomeinī, tendencies as well as very astutely and delicately manifesting a couple of Ṭāleghānī’s ‘ideological flaws’. Next, Morrow defends Iran’s theocratic system of governance – pivoted by the role of the regency of jurists – by refuting claims of fascism and dictatorship very methodically and succinctly. The rest of the chapter shows how different political figures in the Iranian government of the time as well as those accompanying Cardenal during his visits were “soon to surface as counter-revolutionary insurgents”.

Chapter seven starts off with raising a number of similarities between Khomeinī and Cardenal but then heavily enters into the rift that resides between the political quietist and revolutionaries amongst the Ayatullāhs, sometimes raising unreferenced subtle and sensitive points that show Morrow was either directly or indirectly in close touch with the goings on of certain well-known religious families. In chapter eight, the author provides a historic-political contemporary analysis of how ties between Iran and Latin American countries have emerged during the decades. Comparing the red, revolutionary, anti-American, pro-independence and pro-resistance trends between personalities (namely Guevara and Chamrān) from both camps, he highlights the God-less commonalities whilst simultaneously arguing against the erroneous claims made against them.

In chapter nine, Morrow delicately describes (in a manner different to chapter four’s format) three forms of weaknesses or traps that Ayatullāhs – and their followers – had fallen into since the Islāmic revolution. They include – in order of ascending ‘failure’ – Ayatullāhs Ṭāleghānī, Muntaẓarī and Sharī’atmadārī. At the end of the chapter, he politely expresses Cardenal’s deficiencies in Islāmic history, refuting Cardenal’s claims against the Holy Messenger of Islām. Chapter ten alludes to parameters that have contributed to Cardenal’s solidarity with the Muslim world, namely the oppressions that the forces of imperialism and especially Zionism have played in more recent times in Latin America. In chapter eleven, Cardenal’s diversion from the orthodoxy is illustrated in the domains of politics, ideology and method of presenting ideas. These inconsistencies need not make one oblivious to the ‘sublime’ goal the revolutionary priest was pointing towards.

Why the abundance of exoteric, zahiri rituals in Hajj? [Part 3]